Posted on June 28, 2018 by grumpyscottishman

So the UN are to investigate the U.K. yet again about the impact of their austerity policies on the poor and vulnerable. 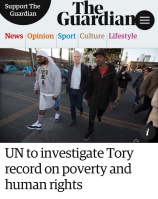 It’s not that long ago that a UN committee found that the U.K. was discriminating against people with disabilities.

When this report came out the media pretty much ignored it and the Tories said no we don’t and got on with continuing to discriminate against people for having the gall to need support in their hour of need. They could not give a shit, even about soldiers sent to fight their disgusting wars. 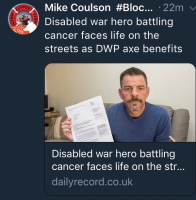 I despised Margaret Thatcher before I really understood what her opinions, actions, and policies meant. In 1980 she threw my Dad on the scrap heap that took five long years to get off of. I saw my Dad, in his early 50s, who had served through the Second World War be thrown aside like a piece of rubbish and I saw a man shrink into himself, a proud man who deserved a lot better but no one really cared, Labour certainly didn’t, and the Tories laughed at the poor as they do now. I hated Thatcher, but this Government are lower than vermin.

The United Nations can investigate all they like, this vermin Tory Government don’t care, too many voters don’t care, the media don’t care, and it just breaks your spirit, as well as your heart.

6 Responses to It won’t matter, the Tories don’t care