Posted on November 9, 2022 by grumpyscottishman 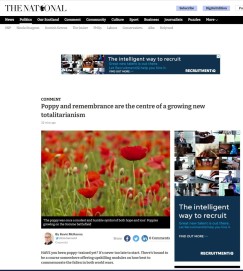 HAVE you been poppy-trained yet? It’s never too late to start. There’s bound to be a course somewhere offering upskilling modules on how best to commemorate the fallen in both world wars (Kevin McKenna) –  I don’t wear a poppy and haven’t for a long time now, 30 years at least. My reasons are a few to be honest, I don’t agree with War being the answer to anything at any time. War is a failure of the politicians, while for others it is a profit making machine that uses our money, mostly against our will, to murder innocent people in the main while making very wealthy people wealthier.

Like Kevin McKenna I also think that the poppy has been weaponised by the politicians of all parties, it has become a symbol of the establishment, the new King will be bigged up this weekend like you won’t believe, there will also be a chance to talk for hours about his Mum as well. Keir Starmer, Ian Blackford, Ed Davie, and Rishi Sunak will probably wear 3 to emphasise their Britishness. One of my other main reasons is that for 3 years I worked as a Homeless Worker, mainly supporting older men, often with alcohol, mental health, and serious health conditions and most between the ages of early 30’s to late 60’s. Many of them were also ex-service men who had not received any support from the state and received even less respect for what they had experienced on our behalf.

This Sunday I will stand for 2 minutes in quiet reflection to remember my late father who served in WW2 in the Navy. He passed 30 years ago, I miss him every day and I don’t want that to ever change as he was a good man, and a brilliant Dad. He was thrown on the scrap heap by Thatcher in the 80’s, like so many other men of his generation, that was the respect he got from the state. The Poppy should be a mark of respect, but as Kevin notes,

Dignity has retreated in the face of braying pretence. Respect has been replaced by dishonour. Nobility and contemplation have been degraded by squawking narcissism and feral zealotry. 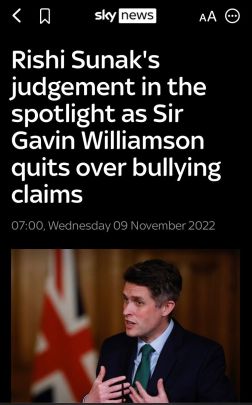 How do scumbags like this even get elected – This toilet stain has also been appointed a Minister 3 times and most recently by unelected Prime Minister Rishi Sunak. Gavin Williamson, as we are all learning the last couple of days, has to be one of the most disgusting Tories in a while. This man was knighted, while telling people to allegedly slit their own throat, jump out of a window, that he owned an MP the Tory Party loaned money to, verbally abused a female Tory Whip for 2 months because he never got an invite to Elizabeth Windsor’s funeral. If any of us did anything like this, we would be sacked and possibly never work again in any field. The Tory Party are full of scumbags like Williamson but what do you expect anymore.

For myself it all links to the whole Britishness, entitlement, wealth, privately educated old boys’ network in politics now. Bad enough that Braverman got re-appointed Home Secretary, but this toilet stain was also appointed. The standards in public life go from the inept like Blackford in the SNP, the useless like Davie in the Liberals, the liar Starmer in Labour, to the lowest of low in the scumbag Tory Party. It’s no wonder there is little respect in people in the UK, total shithole of a country, led by wankers, and voted in by the ignorant and stupid. 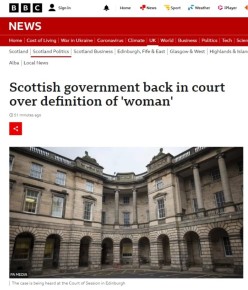 For Women Scotland have said this still did not comply with the court’s ruling, and that by making reference to sex the government was “still confusing the protected characteristics and are trying to redefine ‘woman’ yet again”. When will Sturgeon’s obsession end, how much money has been wasted on an issue that the vast majority of the public don’t agree with, how much more crap governance do we have to put up with. Sturgeon has got to go and go soon. 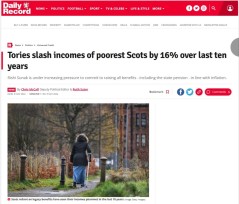 It’s what the Tories do – Benefits have reduced by up to 15.7 per cent since 2010/11 once inflation is included. Universal Credit claimants have also seen their incomes plummet, with a lone parent aged over 25 with one child seeing a reduction in income of 14.3 per cent since 2013/14,

More than 390,000 adults in Scotland claim Universal Credit with many of those already in work. Yet MPs have seen their salary rise from around £62,000 to £79,000 in the same period.

A dad on benefits has told how he often skips meals to ensure his two children are fed. Stuart Chesmar, 50, is unable to work as he is full-time carer for son Charlie, six, who suffers from a heart defect.

He is left with almost no cash after paying bills and feeding Charlie and daughter Kitty, 15. Stuart, from Bute, lost partner Emma, 44, to cancer in September.

He said: “There have been days where I’ve cried because I don’t know how I’ll pay the bills. I have skipped meals so my kids can eat – it’s not an option for them to starve.”

He added: “You can’t live on welfare. A lot of people think you can, but you can’t. I get carer’s allowance, which is £69 per week, but it is taken off my Universal Credit so I’m effectively getting nothing extra for being a carer.”

When I read articles like this, I just wonder what will it take for enough Scots to wake up and see that independence is the only way for our kids and their future. The UK under the scumbag Tories, or any other unionist Government doesn’t bear thinking about, what will it take to get the SNP off their arse to act rather than appease.