Posted on June 28, 2022 by grumpyscottishman

The First Minister has said the “people’s will must prevail” as she prepares to outline the Scottish Government’s plan to hold a second independence referendum in Scotland. (STV) – As First Minister Nicola Sturgeon is set to announce her route to the next referendum today ( I am not expecting much to be honest ) we need to get ready for the Schizophrenia that will start in earnest from Better Together, Scotland in Union, GBNews, and the Tories in all of the unionist parties. Lead us don’t leave us you are too wee, too poor, and too stupid anyway and oh the oil and gas are running out and we got the Scottish Government to give away your natural wind and wave resources pretty much for free. 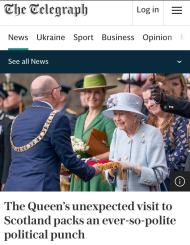 They started yesterday when Elizabeth Windsor, the unelected Head of State who stays out of politics, made a surprise personal visit to Scotland to visit the dirty unwashed jocks. Seemingly The Queen greeted fans in Scotland with a wave, that would be the hangers on, the sycophants, and any poor primary school kids dragged out of the last week of class from watching Frozen on DVD and a butchers apron thrust into their hands to wave to demonstrate Scotland’s love for the union that has robbed us blind and impoverished us for hundreds of years.

The UK is not a partnership in any shape or form and never has been, it is an elitist forced colonisation project in all but name and Sturgeon knows it so should stop using words and language that give the brainwashed a way out of what it really is. Of course the Scottish Tory Unionist leaders from the various Tory Parties all have their say, Anas Sarwar, Scottish Labour Branch Manager, accuses the SNP of “trying to drag Scotland back to the politics of the past”. “She says to listen to the people of Scotland – but she refuses to herself, forging ahead with an unwanted referendum and ignoring people’s desperate cries for help with the cost of living crisis.” Scottish Conservative MSP Donald Cameron called the First Minister’s push for a second referendum “the height of self-indulgence and irresponsibility” (yeah he really said that). “Right now, ministers should be prioritising the global cost-of-living crisis, fixing our NHS and rebuilding our economy from the pandemic”. Scottish Liberal Democrat leader Alex Cole-Hamilton said plans for a second referendum were a “kick in the teeth” for Scots. “Nicola Sturgeon is neglecting everyone who is worried about paying the bills or the sharp spike in Covid infections”. All of them failing to mention that Scotland, not having the powers on an independent country, can do very little to fix the things they bang on about.

So folks let’s all get ready for the Schizophrenia the mental disorder characterized by delusions, hallucinations, disorganized thoughts, speech and behaviour of the unionists that so conned the many non-Scots who tipped the balance in 2014 and live in hope that more Scots wake up if there is another referendum to give us hope that we can escape this nightmare.