Arrogant Bastards v Useless Bastards v Stupid Bastards –  Please excuse the language in the title of this post but I just cannot believe the arrogance of some of these people today at all. There were 16 illegal events held at Downing Street between May 2020 and April 2022. 200 people attended one event sanctioned by senior members of Johnson’s staff and he attended many of them for a drink of wine and even brought the cheese in more ways than one.

83 people were fined by the Police for breaking the law. In Downing street there was vomiting and fighting, cleaning staff and security staff were verbally abused and their concerns were ignored but according to people like Gove it’s time to move on. 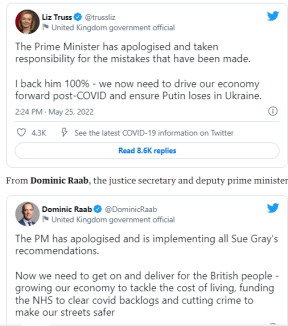 Johnson claimed that staff in his press office thought they were “working around the clock” when they were partying in No 10.

Let’s put this disgrace into context and you tell me that this is right in any shape or form. There have been 22 MILLION Covid-19 infections in the UK with 178,000+ DEATHS in the UK from Covid-19, over 6 MILLION DEATHS worldwide but hey it is ok to have a party here and there, get pissed and fight, ignore the rules that everyone else did their best to stick to, maybe not 100% all the time but pretty much we stayed home, we stayed away from family, we didn’t attend funerals, we didn’t meet up in groups, certainly not a group of 200. But what of the opposition?

They would be the useless 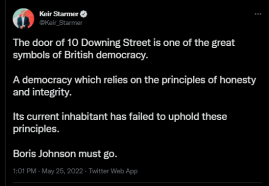 No wonder most MPs walk out when Blackford speaks in Parliament the man is a total waste of time and from praising his Queen what of his other Queen, the one he wore the kilt for the other week, well the crown was there if she wasn’t, but she is pretty mush useless as well given that

but she won’t will she, just part of the same disgusting bunch. What do the stupid think, you know, the voters doon South, the ones who elect the Governments imposed on Scotland.

Well too many still back the liar and are in denial like the sheeple who follow the likes of Sturgeon and Blackford, it is all so sad isn’t it. The UK is a laughing stock all over the world and it will get worse because Johnson is going no where, Sturgeon is going no where, the level now is the race to the bottom in the UK and in Scotland. Kevin McKenna asked in the Herald at the weekend

Is Scotland the most gullible country in the world? Our First Minister seems to think so.

Yes we are, and we are mugs.