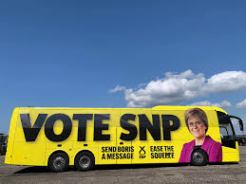 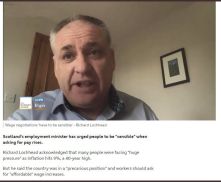 Ease the Squeeze but only for the elected – Richard Lockhart, SNP Employment Minister, has urged workers to be “sensible” when asking for a pay rise. Ease the Squeeze was the SNP Mantra in the local elections along with the vote SNP and no one else nastiness, total hypocrites, he noted that the country is in a precarious position, well who caused that then, wasn’t workers who mostly live on poor wages was it while people like Lockhart get a bumper salary for this bollocks. I am so sick of these people now.

Johnson is a liar –  It is what he does, he has always lied, English voters are happy with it. The MET Police are incompetent at best and corrupt at worst but again is anyone surprised. No doubt the opposition parties will demand Johnson go, Blackford will give a grand speech that most other MP’s will walk out on, the media will big this up as a way to protect the Tories. Johnson will not resign until the people who really control the Conservative Party decide he has run their course and not a second before. It doesn’t matter what we think and unless he kills someone Johnson is as safe as you get as a PM. It is all just a game and even if he went they just put some other nightmare in place and the game goes on until English voters decide they fancy a change, Scottish voters just don’t matter and we have our own problems, we have Sturgeon and the SNP.

Workers fighting for better conditions wrong, corrupt and incompetent politicians are fine though –  Evil rail workers, how dare they fight for a decent pay rise, how dare they remove their labour when they, like most of us, are getting shafted big time when it comes to pay. COSLA have offered local authority workers in Scotland 2% this year, so far this has been rejected, rightly so. When inflation hits 10% by the end of June this is basically an 8% wage cut at a time when local authority staff are being asked to deliver more and more with less and less. Wages are still worth a third less in some parts of the country than a decade ago, according to a report. Research by the Trades Union Congress (TUC) found that the average worker has lost £11,800 in real earnings since 2008. That is the reality of the situation, you can only push people so far and there will come a tipping point, I really believe we are getting to that point, well in England anyway, in Scotland we will probably ask for more.