Toilet Stains of the worst kind 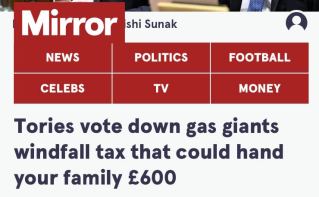 Some toilet stains even vanish can’t shift – MPs rejected a wind fall tax on energy companies by 310 votes to 248, and not one Tory MP backed it. Surprise surprise, scumbag Tory MP’s voted against a windfall tax that could have raised billions and provided a £600 cut in energy costs for the poor people. We all know that the prices of food are eye watering right now, all of our bills are going up daily, and inflation set to hit 10% in the next couple of months. Chancellor Rishi Sunak hinted the government could perform a U-turn in future, however, as he said “no option is off the table”, yeah I bet it is.

How much have food prices gone up?

According to the Food Foundation, prices have risen 5.1 percent on average in the 12 months to February 2022.

The foundation says food prices have risen in all categories, the highest increase of 6.7 percent has been in oils and fats and then fruits at 6.2 percent.

Milk, cheese and eggs have risen by 6.1 percent, and meat has risen by 5.2 percent.

Ed Miliband Labour MP said during the debate that “Every Conservative MP who voted against the windfall tax tonight has condemned millions of families to misery and anxiety as they struggle to pay their energy bills.

“Tonight a message has been sent by the Government that they will do everything they can to protect the oil and gas companies, and refuse to act to protect families; it says everything you need to know about where the Tories stand.

I think my wording would have been stronger but we all know that in the toilet that is Westminster MP’s are not allowed to say a bad word. However the toilet stain Tories do have an answer to this crisis though,

This would save most working people less than £100 pounds per year, £175 if you are earning £30,000 a year which the toilet stains seem to think everyone earns in the UK. However as is always the case with the scumbag Tories there is a major catch.

Paul Johnson, director of the Institute for Fiscal Studies, said: “The Chancellor has managed to announce tax cuts without reducing the planned tax take from previous plans.

“The cuts to income tax and National Insurance are effectively paid for by increasing revenues as a result of fiscal drag.

“The freezing of the income tax personal allowance and higher rate threshold turn out to be much bigger tax rises than first intended.

The result of the spring statement was that we will all be paying more in taxes, this will allow us to pay for all the dodgy Covid contracts that went to Tory Party friends during the pandemic, it will allow us to protect share holders who make money from our poverty, and it will do nothing for anyone who relies on social security to avoid starvation, they get to die to get the costs down to look after them in caring sharing Britain.

This Tory Government are SCUM, end of, and I don’t care what anyone thinks of the language I am using today, they are shit bags and the opposition in all of the other parties are cowards and shit bags too for their absolute lack of ideas and balls to really take the toilet stains on.

The lack of action on independence is depressing, the lack of an actual socialist in the Labour Party is even depressing, I used to say that Scots wouldn’t support independence until they are starving in the streets, well obviously I got that one wrong too.

11 Responses to Toilet Stains of the worst kind