A Couple of Things or Three

Posted on December 8, 2021 by grumpyscottishman 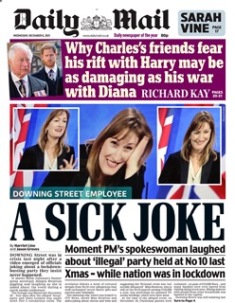 I would not normally get too hot and bothered with the continued revelations of the alleged Christmas Parties last year at Number 10 but it is starting to grate a bit now as it emerges there may have been two parties and buffoon Johnson was even at one of them. When you think of the people who died alone, of the relatives who could not comfort loved ones, when you think of the loneliness that many faced as they chose to stay at home last year you can get a bit angry, but the real danger here is you can actually get apathetic. Cocaine found all over Westminster, billions given to Tory donors in dodgy Covid contracts, social security cuts to the poorest and most vulnerable, NHS all over the UK on it’s knees, rising food and energy prices with wage stagnation or unemployment, increased food bank use and homelessness, the list is a long one and is becoming endless.

This Tory Government are full of scumbags, I do not apologise for using that word either, they are scum of the lowest order, and the media who allegedly have covered this up for the past 12 months, as some of them were allegedly at the parties, are complicit in this as well. Not only is it clear that this Tory Government, and their staff, have an attitude of the rules don’t apply to them we can also see that given laws will have been broken the Metropolitan Police are well and truly either afraid or in their pocket with their refusal to investigate this,  Metropolitan Police has said it does not routinely probe “retrospective breaches” of Covid laws amid calls for an investigation of a No 10 Christmas party held during 2020’s restrictions. Every crime committed is a retrospective crime, do they really think people are that thick, obviously they do and we cannot, and we must not allow this story to be buried, or allow Johnson off the hook with this, but then what can we do when the scumbags have an 80 seat majority and the media and Police in their pockets.

The UK truly is a banana republic in every sense now, we are being governed by people with zero morals, little intelligence, or who just don’t give a shit. What will it take for people in England, and many in Scotland, to sit up and take notice of the toilet scum who occupy the seat of power in England and whom have pretty much total control over Scotland when they want it. Before anyone says Scotland has a devolved Government with power, does it really. Scotland has a devolved Government with responsibilities that can be over ruled or over turned at any time by Westminster due to the Sewel Convention and the Internal Markets Bill. The Scottish Government can mitigate, that is all, nothing more nothing less and makes the lack of action on independence by the SNP even more perplexing.

You just can’t make up the hypocrisy of the Scottish Government, and the opposition at Holyrood some days can you, they are fast becoming as big of a joke as the scumbags in Westminster. Sports minister Maree Todd SNP MSP confirmed the government’s position and said it continued to be “deeply concerned” by human rights abuses in China. Mercedes Villalba, Scottish Labour MSP, said that  “Everyone should have freedom of expression without fear of arbitrary punishment,  tell that to Craig Murray or Julian Assange who were/are jailed for reporting the truth of what our so called elected representatives get up to in our name. The USA are boycotting and no doubt others will as well and while China won’t give a crap all that much, if they really felt that strongly they would not send any teams to the Winter Olympics at all, platitudes and hypocrisy abound. 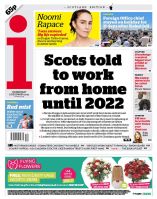 I think if people can work from home this winter then they should to be honest, I like everyone else want to see the end of this Covid-19 nightmare, however we cannot be taking too many risks. I had the booster and the flu vaccine yesterday and today I am not feeling great at all and how I feel has reminded me of what Covid was like when I had it back at the end of January so please don’t take any risks you don’t have to as it really is horrible and it kills. We are going to have to live with Covid-19 in the longer term by the looks of things and people are becoming too complacent to be honest, myself included until a couple of weeks ago when I started to make a real effort to follow the guidelines again, we all need to do our part again, even if the politicians and their staff don’t in too many cases.

4 Responses to A Couple of Things or Three