Posted on October 27, 2021 by grumpyscottishman

I have been finding it more difficult to motivate myself to stay up to date this last couple of weeks due to both personal issues that I am dealing with and the simple fact that I totally agree with Alba Party Leader Alex Salmond when he says that “ Despite national independence for Scotland being more important now than ever, especially if we want to ensure that we choose the policies to recover from Covid, there is no sign of any urgency at all on the constitutional question.” Alex goes on to say that “Scotland’s independence is bigger than any one party, this was a key lesson we learned in 2014,” he said.“The prospectus for an independent Scotland should be formed from the input of those of all parties and none. However, it is incumbent on the party of government to lead the charge and get on with the job.” 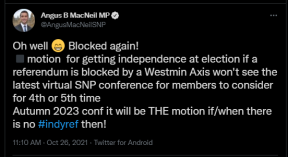 He is of course 100% correct but it will fall on deaf ears, like it has for Angus McNeil SNP MP yet again. Nicla is more interested in destroying the Oil and Gas sector this week while having no economic case on how to replace it going forward. The SNP at their now customary online conference next month, that amazingly coincides with the Alba National Council meeting, wow, how can that happen two times in a row, will debate “Conference acknowledges that Scotland has always been a trading nation and conference agrees that an independent Scotland will seek to re-join the EU, the largest free trade block in the world, in order to access free markets and increase trade with our nearest neighbours,” it says. “Conference also agrees the Scottish Government and UK Government should strive to reach an agreement which will allow for seamless trade between Scotland and the rest of the UK. No debate on how to actually achieve independence but let’s pretend we have done and jump ahead and debate something that the English Government will never debate in a million years unless Scotland is actually independent.

So with the personal issues I am dealing with right now, and the fact that Sturgeon just gets more disappointing and depressing each day, to say I feel dejected right now is an understatement indeed. The only hope for the independence movement is for someone to find some way of getting Nicola Sturgeon and the current SNP leadership gone from the debate because again I agree with Alex Salmond who “has raised doubts over whether the Scottish Government can meet its timetable to deliver a second independence referendum by 2023”. Of course they can’t as the English Government won’t give them permission and my belief is that that is what Sturgeon is depending on going forward, I just do not believe for one minute that the Scottish Government will either seriously seek to hold or will hold a referendum before the end of 2023 and feel that until she is gone we will be in a perpetual groundhog day as far as independence is concerned.

This will however give Alba and ISP time to continue to build a stronger foundation going forward which they do require if they are to be in a position to pick up the aftermath of Sturgeons anti independence scorched earth policy.  For myself, I will hopefully find the time to support my membership of the Alba Party leading up to next years council elections but I also suspect that I will not be blogging anything like I have been this last few months. I have things I need to sort out but I also do not want to be repeating myself on a daily basis regarding Sturgeon’s unionism and SNP incompetence.

The day after the referendum in 2014 was the lowest I felt prior to the last few weeks where I have just felt dejected, so while I am not giving up I am slowing down like some of the other bloggers and output will decrease a little. I think in some ways it is time to stand back and allow Sturgeon to dig that hole deeper that will eventually bury her and have the energy to help pick up the pieces rather than allow her to take us all down with her. Sturgeon, the team around her, and her cult have taken us to the edge of an abyss with her gender agenda, the eradication of women as a species, the end of free speech, her incompetent Government and her total lack of anything approaching independence.

However, we will like a phoenix rise from the ashes if we don’t let her take us down with her, we will live to fight another day and come back stronger with the Alba Party, ISP, and the wider YES Community but we will need the energy to do it and right now I just don’t want to spend any more energy on Sturgeon and the SNP, they are a lost cause and it is time to let them dig that hole to the bottom and fall into it. We can then fill it in and move on. So while I will be around I just won’t be as much, like Yours for Scotland, I am going to work on other things for a little while and only blog either about Something Different or when I really have something I want to say.