Posted on September 19, 2021 by grumpyscottishman 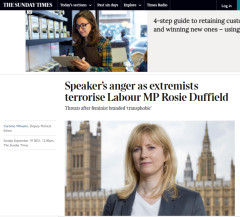 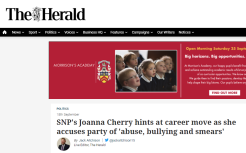 “I suspect I won’t be a member of parliament for much longer, but while I am I will still try to be an independent and thoughtful voice, and I will always fight for Scotland to be the kind of country, regardless of whether you are a unionist or a nationalist, where everyone, everyone, has equal rights, and everyone has free speech.” The damning words of Joanna Cherry SNP MP in the Herald today. This was followed by Rose Duffield Labour MP who said today in the Times “LGBT+ Labour now seem to hate my guts and I feared they’d have a massive go at me at conference,” Duffield said. “The people who threaten me I don’t think are actually likely to harm me. They just say it often and very loudly.”

The SNP and the Labour Party are infected by increasingly militant transgender activists and yet Nicola Sturgeon and Keir Starmer are conspicuous by their absence, in Nicola Sturgeon’s case she will do a tearful video if the young wing threaten to leave the party but remain quiet when members bully and threaten one of her own MP’s, in fact an SNP Parliamentarian was quoted as saying at the time Joanna Cherry received threats against her and was then sacked from the front bench at Westminster that ‘It’s been well known that Jo and Nicola have not been getting on well for a long time,’ they said. ‘Ian Blackford was the willing stooge to wield the knife. There is no way this would have happened without Nicola Sturgeon. Not a chance.’ (Daily Mail) At least Starmer sent a text to Duffield, couldn’t call no, but a text is fine.

We have all seen the gender warriors from both parties on social media, and when women decide to fight back to defend their rights with peaceful protest they get arrested for displaying ribbons or find that the Scottish Government make it a criminal offence to protest outside Holyrood, the people’s parliament, so called.

The High Court in England ruled, in the Maya Forstater case that her “gender-critical beliefs” fell under the Equalities Act, and were a genuine and important philosophical position that deserved to be protected and that the right of individuals to free speech, even in areas that are hotly contested, has been upheld in law. Remember when Scottish Law was so enlightened, now we jail journalists.

The Gender Reform Act has caused more trouble in the last few years yet will be forced through by politicians, especially Nicola Sturgeon, against the wishes of the majority of voters if a YouGuv poll in July is to be believed that found 47% were against the changes. Now of course Transgender men and women need to be protected against discrimination and abuse, I don’t know anyone who would disagree with that, but that has to apply to those who are critical of the whole debate as their voices are equally valid in the debate, as are their concerns. Some women argue that enabling individuals to change their gender in law by a process of self-declaration would have profound implications for the safeguarding of children, women and vulnerable adults. This is not because transgender people as such represent a safeguarding threat. (The Guardian), they are entitled to that view and should not face threats and require Police protection for holding them.

Joanna Cherry MP is one of the most effective and talented that I think I have ever seen coming from Scotland. I am often very critical of the standard of MP we send to Westminster, Wishart and Law anyone, but in Joanna Cherry we genuinely have a decent human being representing our interests, when Nicola Sturgeon and the SNP should be protecting her their silence emboldens the haters and the gender warriors. Something is seriously broken in the SNP and Labour Parties, something is seriously wrong when MPs feel the way they do and the concerns of women can be ignored or at worst result in imprisonment.

Joanna Cherry is concerned she will be de-selected at the next General Election, she probably will be and we could lose someone who actually makes a difference. Why Joanna remains a member of the SNP Westminster Party is beyond me to be honest, she would be better, and safer, as an independent, or better yet join the Alba Party. That is for her to decide, but I do know that this debate is toxic, is not needed in my opinion at this time, and probably puts women and the transgender community at greater risk, and why, because of the gender warriors and people like Nicola Sturgeon and Keir Starmer.