Posted on September 2, 2020 by grumpyscottishman 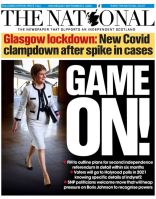 So the First Minister has announced plans to legislate for indy2 within 6 months and will set out the question to be asked etc. The National of course are jumping for joy while the Daily Mail is crying into it’s whatever. There have been predictable comments from the yoons sphere with the branch manager of the Tories Douglas Ross part time MP saying that “the First Minister just doesn’t get it. We need to take Scotland forward and recover from this crisis together, not go back to the divisions of the past”. Scottish Labours only Scottish MP shadow Scottish Secretary Ian Murray said the “reckless” announcement showed that Ms Sturgeon’s “top priority is to divide the people of Scotland”. He said: “Re-opening the constitutional debate will do nothing to help our NHS recover from the pandemic, or help the children who have lost months of education, or help grow our economy. Public services should be the priority, not a divisive second independence referendum.” The Scottish Liberal Democrats, yeah still a thing, sent wee leader Willie Rennie out to comment that “independence got the loudest applause of the afternoon” from the SNP benches at Holyrood, saying “that tells you all about their priorities”. Social media has the usual suspects going back and forth from both sides, nothing new there and while there is ignorance on both sides why do I never hear the yoons tell me why the union benefits Scotland in any detail, they just talk Scotland down all the time like this guy who commented on social media “Where is the money going to come from. No more Barnett Formula from the day of independence which is currently £13 billion. Money for the furlough who will provide that. Transport. I would think the English would be more than happy to see us leave as they will not suffer financially. Use the pound as the currency and have interest levels set in London. Join the EU and wait in line. The biggest market is England. Whose currency?. Progressive immigration. Defence, Taxation levels. If the time taken for Brexit you are looking at five plus years to untangle 300 years”. How anyone could think like that is beyond me to be honest but it is what we are up against, Jockholme Syndrome in all its glory.

The problem I have with all of this is to ask myself why am I so underwhelmed by it all? Is it because we have been here before, is it because the First Minister said she would not hold a referendum without a Section 30 type agreement as 2014, is it because I don’t think the English Government will ever agree to one anyway and there doesn’t appear to be any clarity on where we go from there. Wee Ginger Dug wrote an interesting article yesterday about why now is not the time to start indy2 given that the YES community rely on face to face and boots on the ground to engage and campaign while the unionists have money and the media on their side, let alone the state. He makes a lot of fair points which I understand while maybe being difficult to accept as being stuck in this union offers me little hope for my children’s futures. Wings Over Scotland Stuart Campbell feels this is all a bit of bluster and that we have heard it all before and will hear it all again, I totally get why he feels that way as a part of me does too, again another opinion and an interesting read. Some on social media think this announcement is about maintaining the SNP vote leading up to next years elections and guaranteeing the SNP another five years in government then nothing will happen, again I understand why people fear that I really do. We have been on referendum alert for at least 5 years and it is very tiring I would imagine for many.

I suppose this announcement was a few things, an attempt to boost the yes community and to let them know that the SNP are still serious about independence and to put pressure on Boris Johnson, a man who doesn’t seem to cope with pressure all that well, that this issue is not going away and I suppose force him into saying that there is no way that Scotland is getting permission from the English Government for another vote, again this will just reinforce our standing in the UK and help the yes cause you would expect. I would have also expected that a draft bill be ready to go a long time ago to be honest and many are asking when does loyalty to the SNP become the stupidity of the old Scottish Labour Party, either way I am sadly underwhelmed and under enthused but maybe that is just how we all feel right now with the year we are having.