Posted on October 28, 2019 by grumpyscottishman 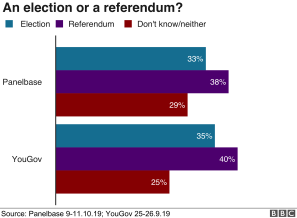 The debate that is on-going right now to decide if there should be a general election in December are of course debating Brexit. Everyone appears to be saying they are going to vote against the motion to hold an election that they claim they want, so why the f are they debating it in the first place. Democracy, or the joke that passes for it in the UK, is laughable. The politicians who currently sit in Westminster deserve our disdain and our disgust, why do we even bother to vote!