A Grumpy Survey: The Results

Posted on April 26, 2019 by grumpyscottishman

I ran a wee survey the other week so here are the results, all unscientific but here goes. There were 99 respondents so thank you very much for taking the time to do the survey.

Q1: If there were another independence referendum tomorrow how would you vote? Pretty clear and pretty much what I expected given those that read the blog.

Q2: If Scotland were to become independent should Scotland use the following for currency? This one surprised me a little as I thought the UK pound might do better given the Growth Commission report. 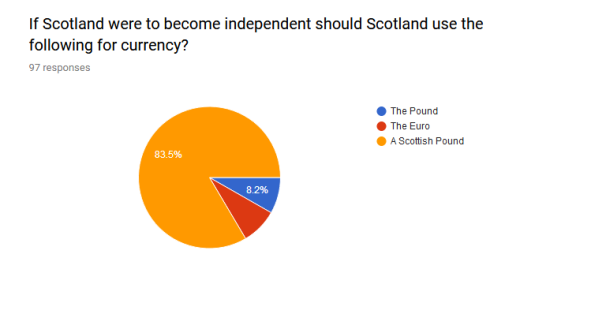 Q4: Have you watched the BBC Scotland Channel? I haven’t watched the channel at all and know a lot of people who haven’t and those who have don’t have much good to say about it at all. The general feeling is that it is cheap and pretty crap.

Q5: Do you believe that the SNP are dragging their heels over a future referendum on Scottish independence? Given the announcement by Nicola Sturgeon on Wednesday I thought this question might be rendered useless in the context of aiming for a referendum before the end of this parliament. But given the negative response to the statement by the yes movement the answer is probably a fair reflection as many feel that the next independence referendum has been kicked into a slightly longer grass.

Q6: If Indy2 is kicked into the long grass do you think the SNP will lose votes? I think this could still be the case in a small way given some of the comments I have read on social media, it could be damaging for the party at the polls if they don’t follow through on 2021.

Q7: How will you vote in the EU Elections if they go ahead? Again not really surprised by this but the Brexit Party getting 8.2% was a little surprise. Labour no where to be seen at all which could indicate how far this party have fallen.

2 Responses to A Grumpy Survey: The Results