Posted on April 21, 2019 by grumpyscottishman

It appears that the BBC Scotland channel is failing to attract many viewers, anyone surprised? 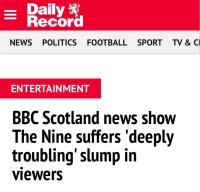 Seemingly The Nine has slumped to less than 9000 viewers per day. Now I have never watched BBC Scotland, I gave up on the BBC a long time ago and swore to myself it’s not a channel I’ll watch that much anymore other than the Parliament channel. I’m not surprised though that this channel is failing.

It’s only on a few hours a day, the programmes don’t look all that great and the budget is pretty small by tv standards. For me this was an attempt by the BBC to put Scots, disgusted by its behaviour, from the Indy ref, the blanking out of Scottish politicians, the aggression in interviews with the SNP and soft touch to unionists to Saville and liar Marr back in their box.

I think they hoped that by giving Scots a few crumbs from their London table that we would go away and stop slating them and their right wing British agenda, well they were wrong. I don’t think they will be surprised by these low figures, it will give them an excuse to cancel the channel, they can then blame Scots for not watching and push the narrative that Scots want British tv.

The simple fact though is that control of the BBC in Scotland needs to be devolved but it won’t be. There is no larger a political broadcaster pushing propaganda than the BBC, they actually make Fox News look sane. We have terrible media in this country, especially around news and current affairs. STV Scotland Tonight started well but pretty much just mirrors the BBC now in my opinion in its bias coverage. Sky News is shocking with like of Kay Burley, ITV and Channel Four not much better.

So is anyone surprised by the figures and will anyone care if it goes to the wall, I won’t.

5 Responses to Designed to fail?