So the budget, the devil is in the detail as we all know. Philip Hammond has said that the “Era of Austerity is finally coming to an end”.

That should have read ” poor folk of Britain, I’m letting you catch a couple of crumbs from the posh table, rejoice and be happy”. You see poor folk will see their tax allowance rise by a whopping, wait for it wait for it, £650.00 a year. F me they are going to be rich beyond belief. However, what he also should have said was ” wealthy people and higher earners, I have shafted the poor big time again, the BBC are reporting what we told them to report and you are going to be better off by £3650.00 per year, go and have a nice meal, a skiing holiday to aspen and laugh at the poor folk if you pass them sleeping on the streets and oh by the way, I also made sure those on benefits remain worse off the lazy gits . Why don’t they just die quick and we wouldn’t have to put money into the NHS and we could give you a tax break to go private” , that is what I imagine he really wanted to say. 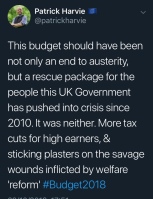 The Tory Party are SCUM (oops upset some politically correct yessers there) there is no way around it. And if you heard BBC Scotland Radio last night and the interview with Derek MacKay MSP, Scottish Government Finance Secretary, they are full of Tory followers as well. They could not have tried to paint a prettier picture of the budget if they tried, in fact I wonder who in Tory Central office wrote the script for them. Corbyn’s response was diabolical in the main, the only thing he got right ws when he said the budget was really about “ideological tax cuts” . He should have hammered them on the impact this will have on the poor, should have read out all the food bank figurers, the falling life expectancy in poorer areas, the real story of under employment and unemployment but he didn’t, he never scored a hit as far as I could see.

Douglas Ross, Scottish Tory MP, was also his usual horrible obnoxious self last night on Scotland Tonight, who I am convinced are fighting to be the Scotland version of Fox News in America. They had Paul Sweeney Labour, obviously going for the vacuous and then Kate Andrews from the so called Institute of Economic Affairs, they had to have another right wing nut job on to support Ross. The headlines today will be all about the extra money that might come to the NHS if there is no hard brexit, the Scottish yoons of all colours will big up the crumbs that Scotland got and a partridge in a pear tree.

The reality though is that for poor folk, like the majority of us, we are yet again paying for the wealthy to stay wealthy, and yet people out there who have little will still vote for yoon parties and the media will kiss their ass until the cows come home. The Tories remain the scummiest party ever, Labour remain the most ineffectual in living memory and the Liberals, well who cares what they think anymore. We are in a perpetual spiral of poverty for the many, many are not eating, many are sick, many are sanctioned for needing help, many are unemployed, many are under employed and the Tories, no matter what the yoons at the BBC and STV report are not the party of the many they are of the few. I cannot disguise how much I loath that party and the destruction they have brought to communities all over Scotland my whole life.