Just as well Better Together saved us from independence

Posted on November 29, 2017 by grumpyscottishman

So it has been announced that 200 jobs are to go at Rosyth Navel Dockyard. 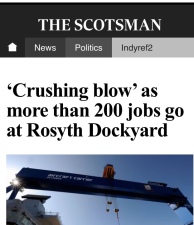 Another broken promise, and another blow to the Scottish economy by the lying shit bags that made up Better Together. We continue to see story after story of the betrayal of every no voter. This so called union is rubbing your nose in it everyday, and laughing at you. Watch a little of Parliament and see the laughter every time the SNP stand up. They took you for fools, and continue to take you for fools every single day, so what will it take for you to stand up and fight for Scotland now!

I sent the following tweet to the yoons and no surprises haven’t had a response from any of the shit bag unionist parties. Haven’t even had a yoon troll try to get out of this one.

The Trade Unions shouldn’t be sleeping easy tonight either, they campaigned to keep Scotland in this crappy country, and the biggest set of liars were Scottish Labour. Where is Jackie “the mouth” and friend of Tories Baillie this morning. Probably still trying to figure out a way to blame the SNP. Seperation doesn’t shut dock yards, Unionists do by just paying the workers off a little at a time and move the work to Liverpool.

I really hate this country more and more everyday.